This children’s book is based on actual events. At the age of eleven, Naya Nuki and her friend Sacajawea (yes, that Sacajawea) were kidnapped during a raid and marched about 1,000 miles to the east, into what is now North Dakota, to serve as slaves of the more prosperous Minnetare.

Naya Nuki determines to escape. She begins preparing before the outbound journey is even over, memorizing landmarks and so on. (Luckily, in order to get back to her home country, she basically just has to follow the Missouri River.) She then busies herself being a model prisoner, while also obtaining and hiding the things she will need for her journey, such as a buffalo robe (basically, a winter coat/sleeping bag), moccasins, extra food, and even a knife.

Sacajawea isn’t interested in trying to escape, being fairly sure that the girls will be quickly run down and killed by their captors. Shortly before Naya Nuki’s escape, Sacajawea tells her that she has been sold to a white man. (I knew Sacajawea was married to a Frenchman, and I’d always wondered whether it was a romantic interracial love match. Turns out, not so much.)

Naya Nuki cleverly waits for a stormy night to escape. She travels by night at first in case she is being tracked and continues to think like a fugitive throughout her journey. Once she gets well out of range of her captors, she then “only” has to deal with things like illness, snowstorms, and even a grizzly bear.

This little eleven-year-old girl walks all the way back to her people. She seems so capable throughout most of the book. It’s not until the end, when she and her mother are crying and embracing, that she seems like a little girl again. Her people change her name to Naya Nuki, which means Girl Who Ran. We don’t know what her name was before that, so Thomasma calls her Naya Nuki throughout the book.

Four years later, Sacajawea shows up at the Shoshoni camp again, this time in the company of the Lewis and Clark Expedition, and carrying the baby she had with her French husband, Charbonneau.

I’ve always admired Sacajawea for making that journey with a baby, but Naya Nuki … wow.

Here are some charts I’ve created to illustrate my reaction to this true story.

Naya Nuki, while a lot physically stronger than yours truly, is still an eleven-year-old girl, not a grown man. She doesn’t have unlimited strength, speed, or endurance. 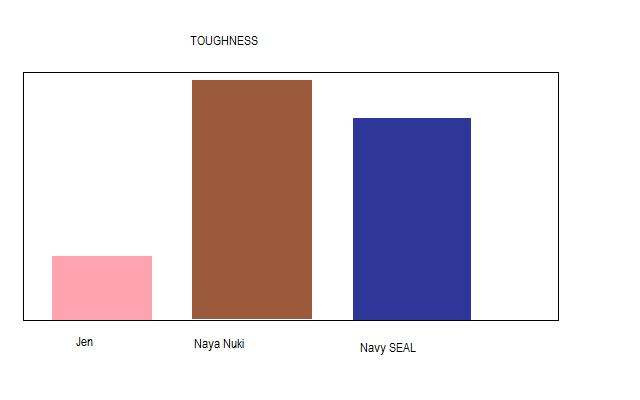 But her mental toughness knows no bounds.

2 thoughts on “Finally Read This”

As We Were Discussing …

If I speak in the tongues of men and of angels, but have not love, I am only a resounding gong or a clanging cymbal.